80% of towns and cities as clean as European counterparts “absence of community involvement” explains ongoing litter problem in disadvantaged areas.

The latest survey by business group Irish Business Against Litter (IBAL) shows improvements in cleanliness across the country over the past year. Over 90% of rural towns surveyed were deemed clean, while Dublin, Cork and Galway city centres all scored well in the ranking of 40 areas.

IBAL says a lack of community involvement explains why certain disadvantaged urban areas continue to be plagued by litter despite improvements elsewhere.

An Taisce assess litter levels in 40 towns and cities on behalf of IBAL. 80% of areas were found to be clean, with a top tier of 16 towns deemed “cleaner than European Norms”. Tullamore topped the rankings, followed by Dublin Airport Environs and Leixlip.

Once again there was a wide gap between towns and disadvantaged city areas, with the latter occupying the bottom 6 places in the ranking. “In the 16 years we have been conducting these surveys, this is possibly our best result,” says Conor Horgan of IBAL.

“Across the board we have seen improvements. The news is all the more positive given the importance of how we present our country over the summer months, when we attract over 40% of our visitors. Also satisfying is the pristine state of the roads around Dublin Airport, which help form a first impression for many of these visitors.”

The Airport environs were deemed a “Litter blackspot” when first surveyed 5 years ago.

Tullamore was praised by the inspectors for having “so many top-ranking sites” among them, Lloyd Town Park, “spotless” O’Connor Tullamore Stadium and Patrick Street “looking very well with so much colourful planting in the form of hanging baskets, ornamental trees and large planter boxes.” All the approach roads were also top ranking. While no area was brandished a “litter blackspot”.

Galvone in Limerick City was again seriously littered, while Dublin North Inner City and Cork City North were littered. “We haven’t seen as much improvement in these social housing areas, where communities are often transient, social neglect is evident, and community groups and tidy towns committees are lacking compared to in mixed communities,” says Conor Horgan.

“Without these volunteer forces supporting the efforts of the council, these areas will simply not be clean on a sustained basis.”

Despite improvements in Dublin’s North Inner City, the inspectors highlighted a “dumping ground” near Sheriff St Park, rubbish along the canal pathway at Guild St and several sites suffering from “long-term abuse and neglect” rather than just casual litter. In Galvone in Limerick, the rear of the industrial estate was a litter blackspot, and there were large accumulations of litter at the Irish Rail site near Kennedy Park, as well as at the recycle facility at Roxboro Shopping Centre, which was in “a terrible state”. The surveyors expressed disappointment that “littered sites which were previously highlighted have not been cleaned up.” “Dumping is the new litter” “Be it in cities or in towns, we enjoy a much cleaner environment than 15 years ago, but litter has not gone away,“ warns Conor Horgan.

“This summer we again had examples of extreme littering on beaches for examples, which display a worrying indifference to the natural environment. Marine litter is a source of great concern at present and an issue IBAL may concentrate more on in the future.”

“Also, dumping is on the increase, and the more we ask people to pay for waste disposal the greater an issue it is likely to become. It may not be as widespread, but dumping is the new litter in many respects.” The business group concurs with the “polluter pays” principle behind the mandatory pay-byweight collection system, but believes some of the monies raised should be ringfenced for councils to tackle the increased dumping that will result from people looking to evade the charges.

85% of 32 tourist sites surveyed were clean, among them the Cliffs of Moher Visitor Centre, Muckross House in Killarney, Guinness Storehouse and Newgrange, with the remainder exhibiting small amounts of litter.

IBAL: Set up in 1996, Irish Business Against Litter is an alliance of companies sharing a belief that continued economic prosperity - notably in the areas of tourism, food and direct foreign investment - is contingent on a clean, litter-free environment.
As part of the IBAL Anti-Litter League, An Taisce monitors towns independently and in accordance with international grading standards.
Visit www.ibal.ie for further information. 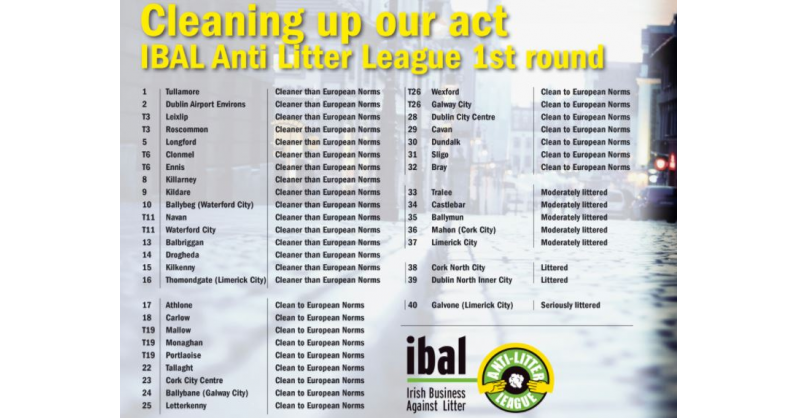 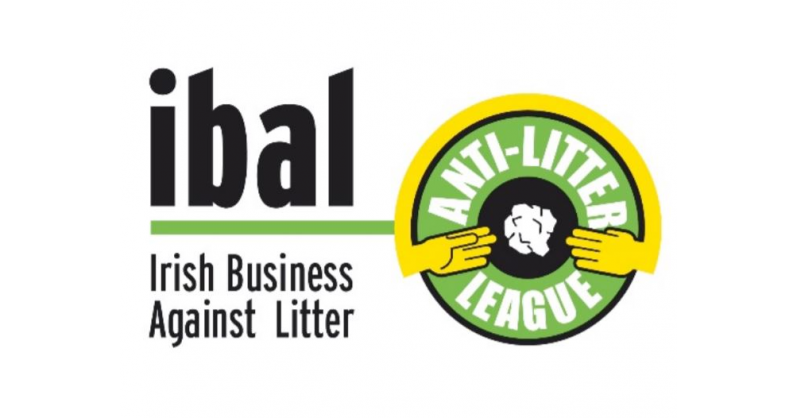