Tullamore Tidy Towns AGM took place upstairs in Hugh Lynches recently as the group reported on a successful 2021 and prepares for an exciting year ahead. Highlights from 2021 noted by the Tidy Towns Chairman Ray Carroll included the National Spring Clean day coordinated by Tidy Towns and Team Tullamore.

Tullamore is one of a few Irish Towns to achieve a Gold award in that competition over the years.
In more recent times the team has set itself a number of objectives which include:
- To win the Tidy Towns Competition.
- To strengthen pride of place and to raise the profile of Tullamore, contributing to the evolution of Tullamore as a quality visitor destination enhancing the attractiveness and vibrancy of the town.
- Encourage greater numbers to visit and enjoy the town of Tullamore while encouraging those who visit the town to stay for longer and avail more of the tourism offering.

Virtual meetings of the Team committee were held on a regular basis throughout the year over Zoom and progress has been made planning actions for the years ahead.

Tullamore River Otter Survey Triturus Environmental Ltd. were commissioned by Tullamore Tidy Towns, with the support of the Local Authority Waters Programme (LAWPRO), to undertake a baseline otter survey of the Tullamore River. The survey was undertaken along 5.8km of river channel during April-May 2021. It identified the most important areas for otters along the Tullamore River in the vicinity of Tullamore Town and survey results to be released at a public information session in the coming months.

Seat at cemetery
The committee agreed to put in place a memorial seat to honour late colleague and friend Emer Groonell. The seat, with a dedication plaque, is located outside the cemetery. It is intended to hold a small “unveiling” ceremony in a few weeks.

Tree of Hope project
Tidy Towns partnered with Offaly County Council in having 6 trees planted at Arden Rd
under an initiative which the former Cathaoirleach of Offaly County Council, Councillor John Carroll, launched to plant trees in each town and village in the county as a gesture to recognise the resilience shown, and sacrifices made by local communities during the Covid pandemic.

Tullamore Living River Project
Committee members along with Shannonside Sub Aqua club and other volunteers worked with Offaly County Council on a major cleanup on Tullamore River on 9th October. Shopping trolleys, bicycles, chairs, a television and tons of general litter were removed from a stretch of the river from the newly developed wetlands at Kilcruttin to Millenium Sq.

IBAL Anti-Litter League, 2021
It is a tribute to the work of the staff of the Tullamore Municipal District that the
town continues to rank well in the national Irish Business Against Litter league. The latest results show Tullamore to be clean to European norms. Well done to the staff involved and also well done to those whose efforts saw Lloyd Town Park achieve its Green Flag, an International accreditation for public park excellence for the 6th year in a row.

Litter picks
Covid restrictions and concerns for the health and wellbeing of our members limited our opportunities for group projects and litter picks during the past year. However individual committee members and other volunteers continued to pick up litter around their own areas and walking routes and I would like to commend them for their commitment.

Gaisce Award:
A student from Sacred Heart secondary school, as part of the Gaisce Awards, carried out litter picks over 13 weeks from September to December. I would like to thank her for volunteering and wish her every success with the rest of her programme projects.

Grants
Tullamore could not carry out our projects without funding and the group was not able to have the annual church gate collections in the past two years but this will resume next August. Mr. Carroll extended gratitude to our main funding partners who supported us during the year. They are Offaly Co Co, the Dept of Rural and Community Development and the Local Authority Waters Programme.

Tidy Towns Competition 2021.
As you know the national Tidy Towns Competition had to be abandoned in 2020 and it took on a most unusual format last year with an online entry form and remote judging. Thanks to the creative talents, enthusiasm, and commitment of the group's PRO, Loughnan Hooper of Dotser, Tullamore's entry was regarded by the adjudicator as very professional and of a high standard. Group activities were restricted so a lot depended on the quality of the entry especially as the judging was done remotely.
2021 saw us getting our 7th GOLD award in a row in the national competition as well as a commendation award at county level and congratulations were extended to Geashill on becoming Ireland’s Tidiest Village in 2021.

Community approach
Tullamore’s achievements in national competitions could not be gained without the collaboration of groups and individuals in the town. Thanks was extended to the staff of Offaly County Council and Municipal District of Tullamore, the members of Tullamore & District Chamber, residents’ groups, businesses, the canoe club, Shannonside Sub aqua club, sports clubs and individual volunteers, who have all contributed to Tullamore's success. Special well done and thanks to all the Tidy Towns committee members for their continued support and commitment to Tullamore Tidy Towns.

Mr. Carroll paid tribute to members Mary Teresa Lynch and Sr Xavier O Brien who, after 40 + years on the committee have retired from active duty. They have shown great dedication and have done trojan work in various roles over the last four decades and they continue to help out in the background with meetings and refreshments.
Mr. Carroll finally sent out an appeal for volunteers to join our association, 'A helping hand is all that’s needed. Whatever your skill set there is a welcome and a place for you on our committee.'

New officers were appointed at the meeting with Shane Murray taking over the reigns of Chairman. 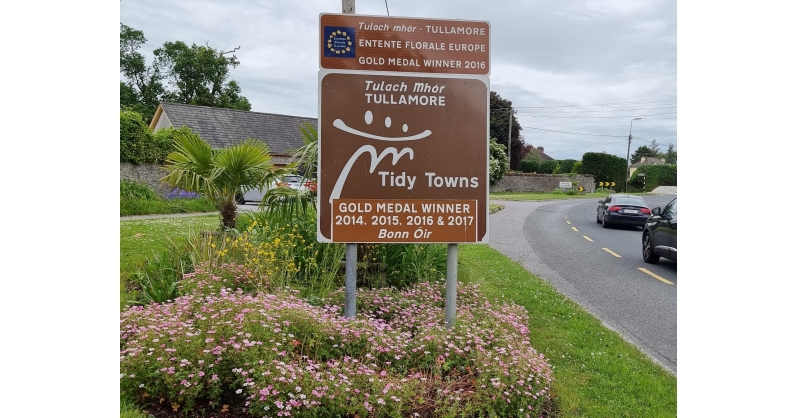